They’re waffles! No, they’re potatoes! They’re potato waffles!? These Waffle Iron Hash Browns and are super fun way to eat potatoes, and cook up very easily in your waffle maker or panini press. Most of us never think of using our waffle irons for anything other than waffles. But it turns out, they’re a great place to cook up some super crispy yummy Hash Browns. Gluten free, Oil free, and of course vegan, and are ridiculously easy. I think you’re going to love this recipe for your next Saturday or Sunday breakfast! 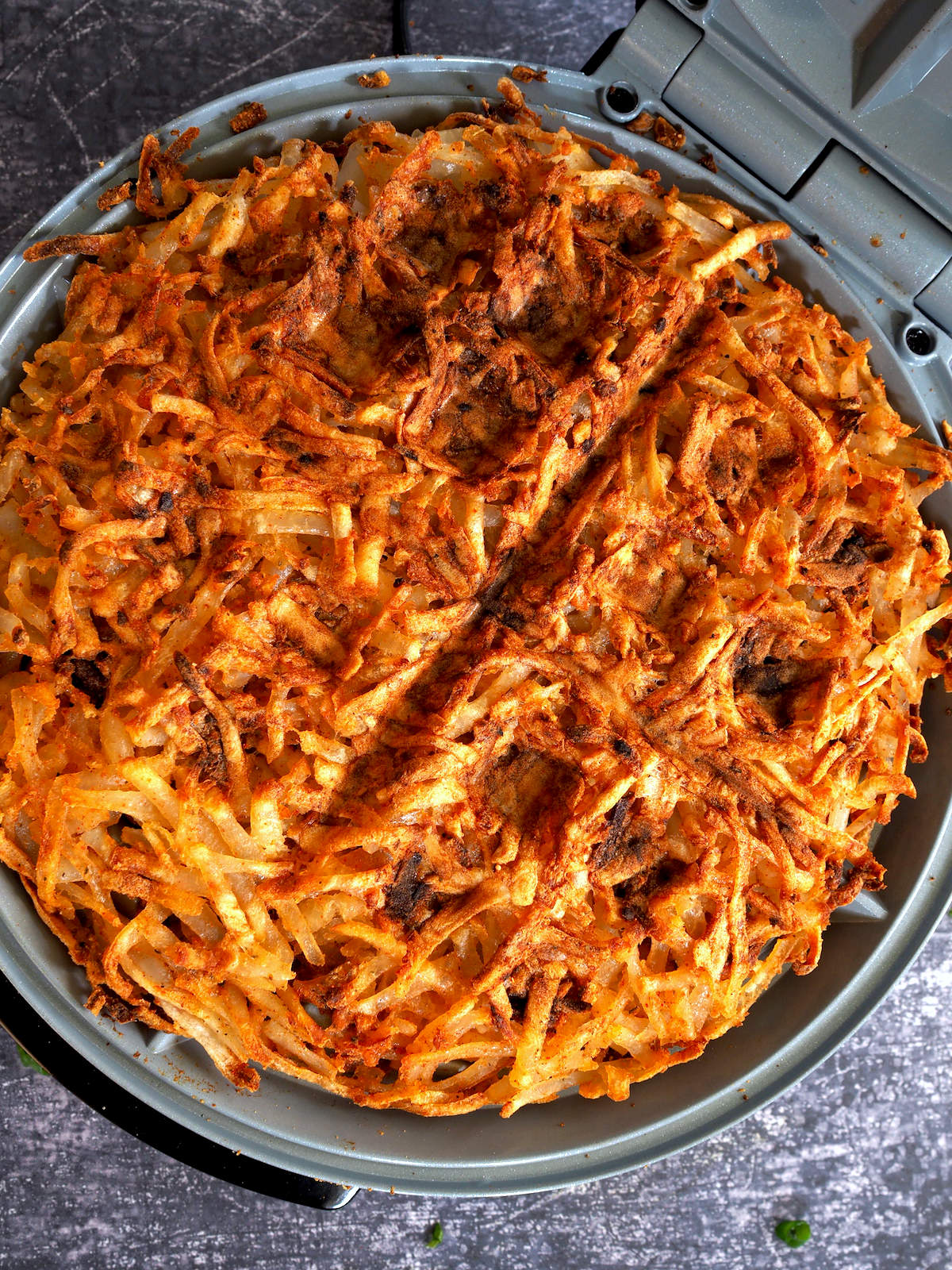 Why am I putting potatoes in my waffle maker again?

Surprisingly, it’s a perfect place to cook hash browns. It does a great job of making them super crispy on the outside, but remaining soft on the inside. It is hard to replicate this texture with other oil free methods of cooking hash browns, and it’s very convenient as well. Once they are in the waffle maker, you don’t really have to do anything. Just sit back and wait for the crunchy goodness!

What if I don’t have a waffle maker?

These would work well on a Panini press also. It’s the same concept and would cook similarly to how they would cook in a waffle maker.

Depending on the size of your panini press, you may even be able to cook them all in one batch as well, which would save on time!

Will they stick to my waffle maker?

If your waffle maker or panini press is a non-stick surface, then they should be totally fine. If you do not have a non-stick coating or it has worn down, you may want to use a light spray of vegetable oil to prevent sticking.

My waffle iron is a ceramic coating, which is not the most non-stick surface, but they still did fine without any added oil. 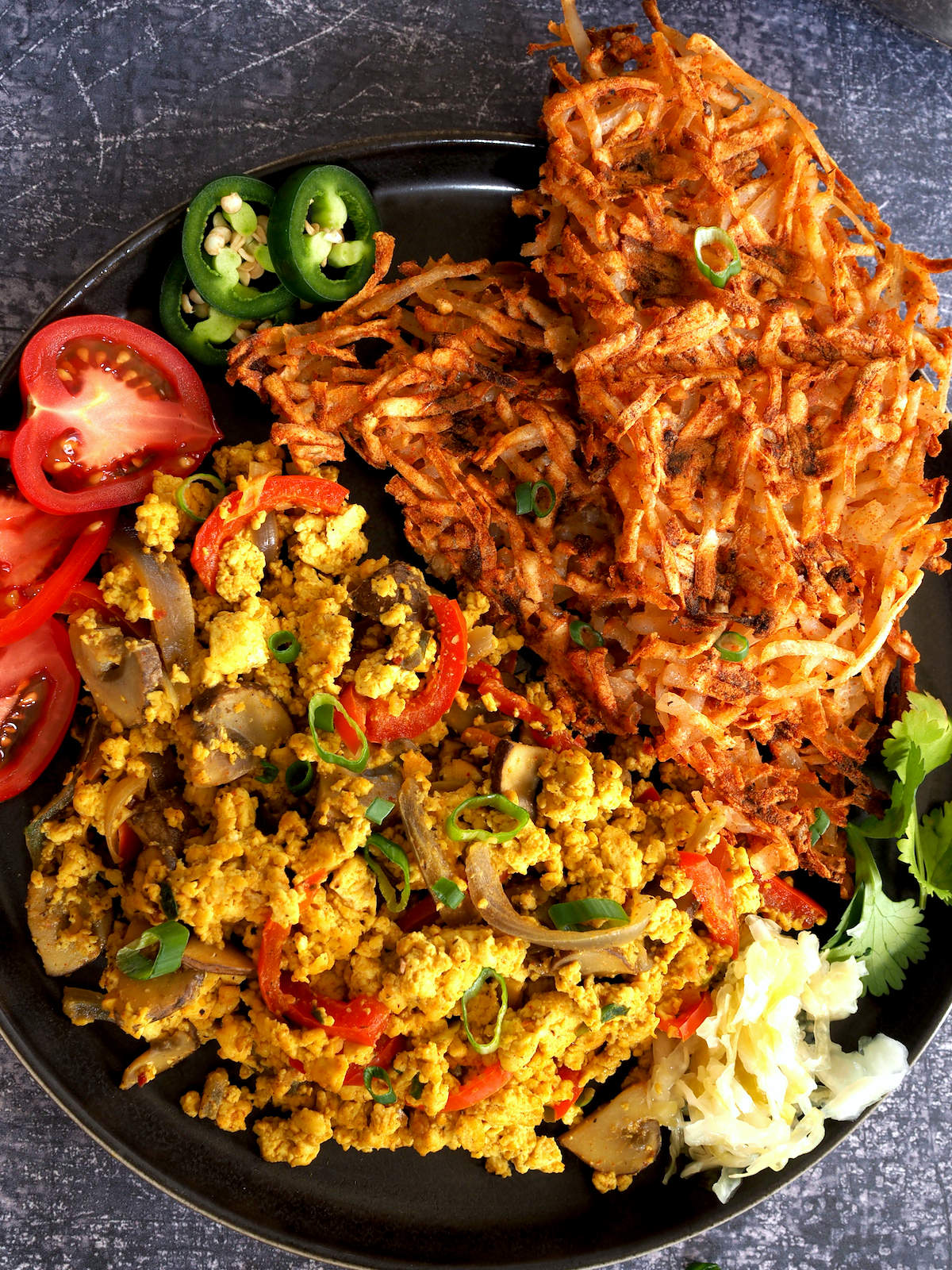 Where do I find oil free hash browns?

A lot of bags of frozen hash browns sold in stores have added ingredients. There are often added spices, salt, and some sort of vegetable oil. Shredded potatoes by themselves are an extremely healthy food. However once you begin to add in oil and additional ingredients, they can become more calorie dense.

I have found these previously at Walmart, Trader Joes, and Target in my area. Just flip that bag over in the store and look at the ingredient list. Try to look for the ones that only have one ingredient: Potatoes!

Do I need to defrost the hash browns?

It is not absolutely necessary, but I find that defrosting them partially helps for the seasonings to stick better and also for the potatoes to spread more evenly in the waffle maker.

If you are short on time, you can use the defrost function on your microwave and put them in for a couple minutes. No need to defrost them all the way.

If you do put them in completely frozen, just be aware that it will probably add a few minutes to the cooking time. 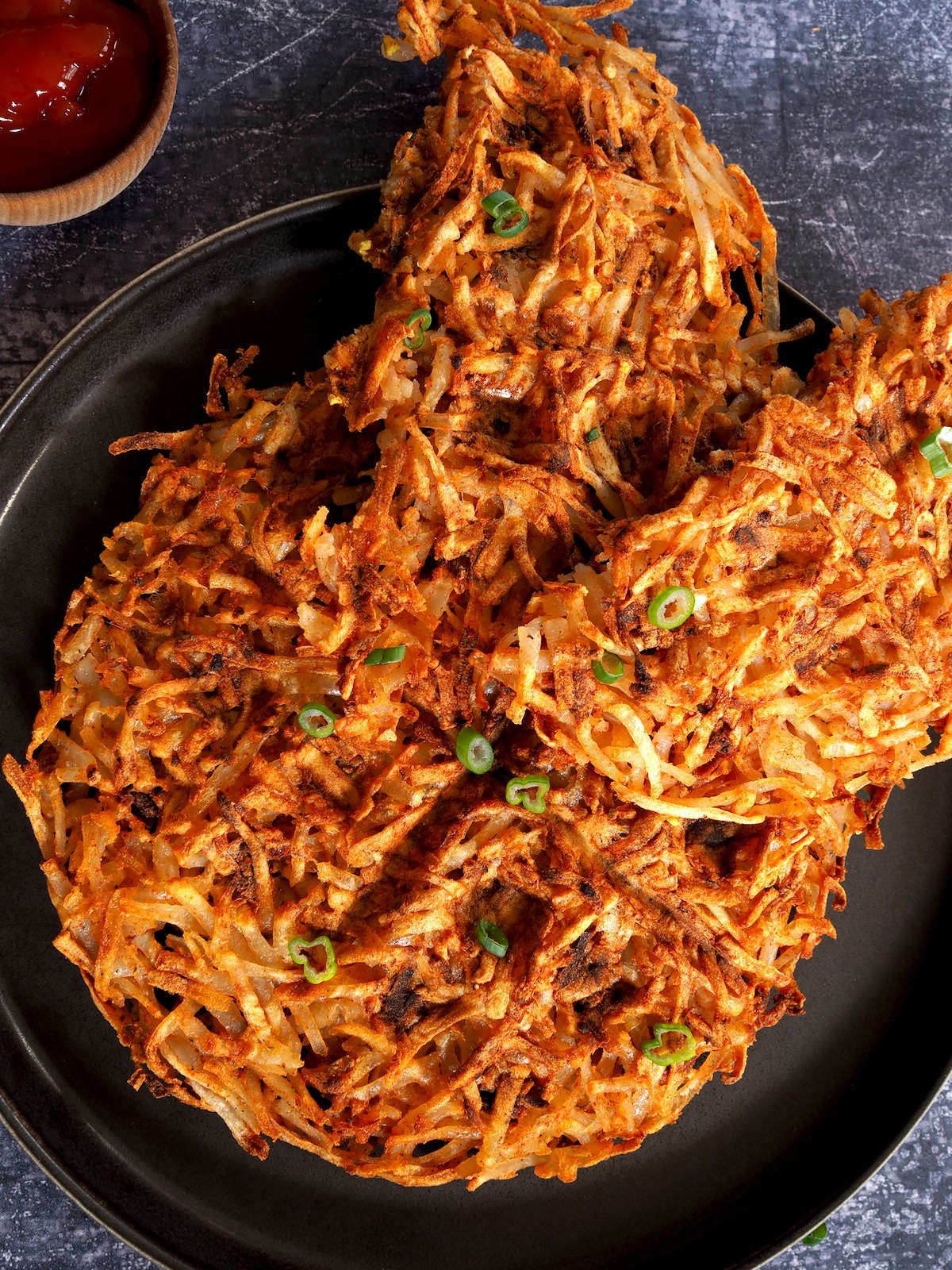 What should I eat with these Waffle Iron Hash Browns?

Honestly, these are great for any meal. They would be wonderful with a side of veggies for a lunch, or just for a satisfying snack. A good place start though is with our Easy Veggie Tofu Scramble for your next weekend breakfast! 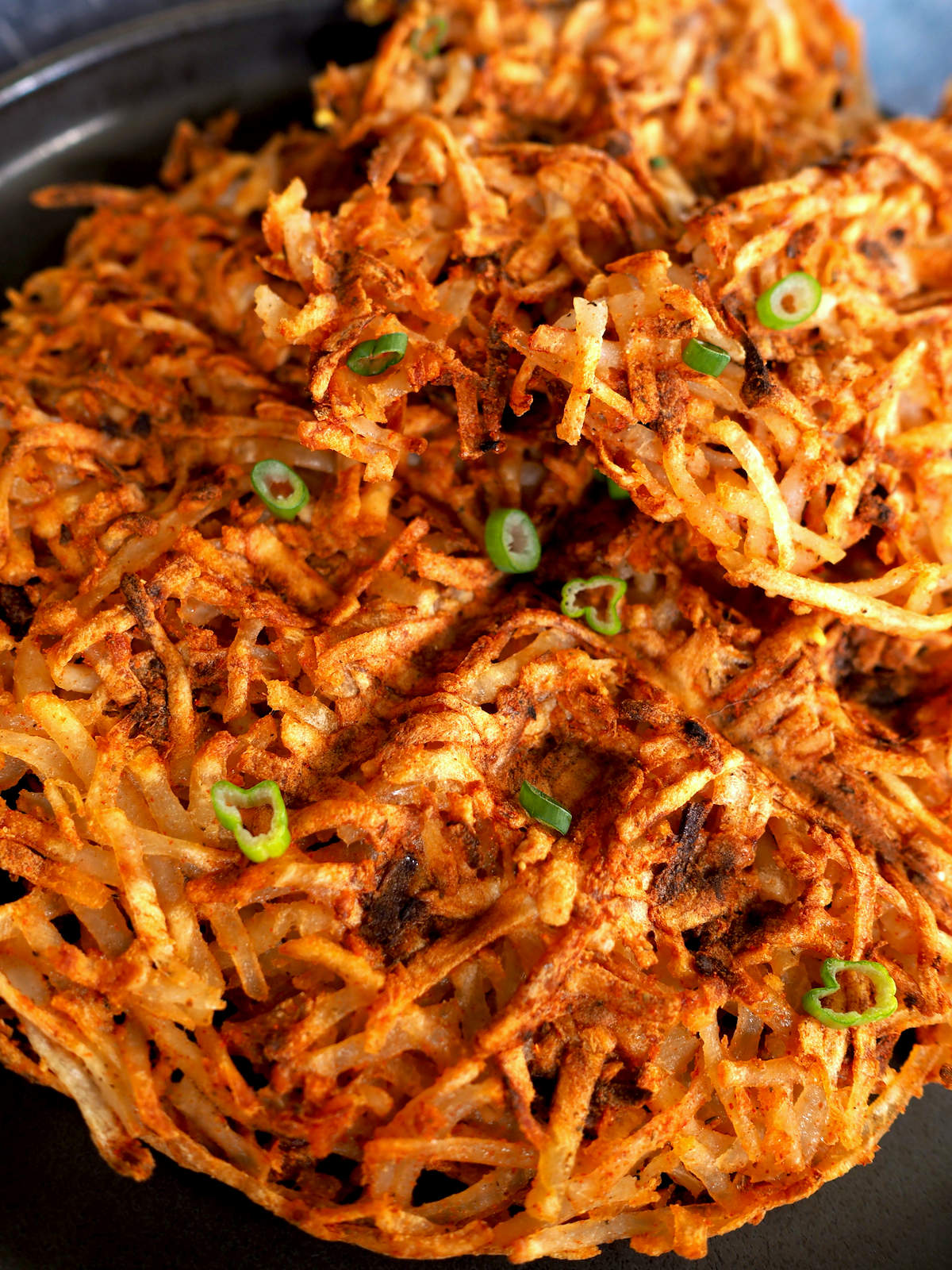 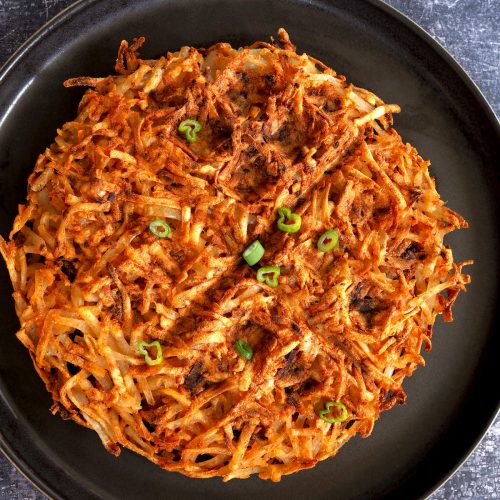 *The amount of "waffles" you get will depend on how big your waffle maker is. I have a smaller waffle iron, and I got 2 large waffles (8 quarters) out of this recipe. *If you have a panini press, you may want to do one large hash brown using the entire mixture and cut into pieces they are done cooking. *Most stores sell bagged hash browns that do not have additional ingredients added. You want to look on the back of the bag for the kind that only have one ingredient: potatoes. I have found them at Trader Joes, Target and also Walmart in my area. If you are not worried about added oil or other ingredients, then feel free to just buy whichever bagged hash browns you prefer.
Keyword oil-free, vegan, waffle iron, wfpb
PrevPreviousEasy Veggie Tofu Scramble
NextGreek Style Stewed Green BeansNext
Instagram Pinterest Facebook 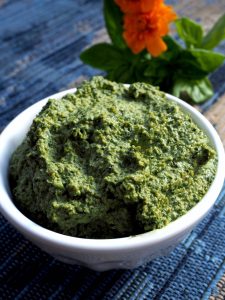 The Best Vegan Pesto is gluten free, dairy free, oil free and full of whole plant goodness! Use for pastas, as a spread, or in salads! 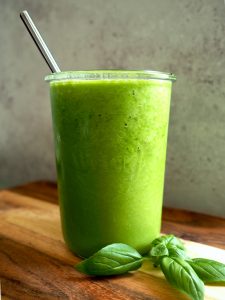 Kick your smoothie game up a notch with this Mango Basil Green Smoothie! The perfect refresher for a hot summer day! Vegan, Nut & Gluten free! 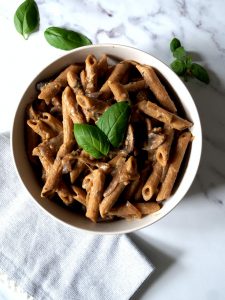 This Creamy Vegan Mushroom Pasta is bold and flavorful dish when you’re looking for an easy weeknight dinner. Nut free with GF options! 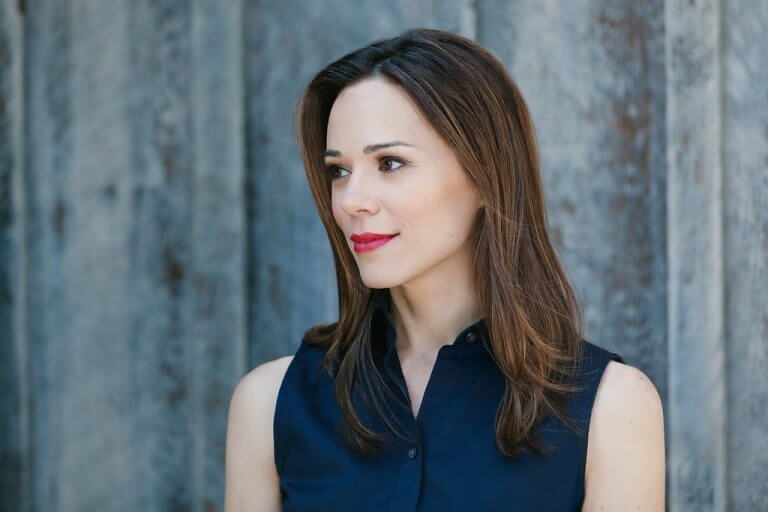 So glad you stopped by! Here you’ll find Whole Food Plant Based recipes that are easy, healthy, and of course delicious. We’re new around here, and we hope you stick around while we continue to build this site and add weekly recipes. We’re confident you’ll find something that will become one of your new favorites. Welcome to everyone of all diets! 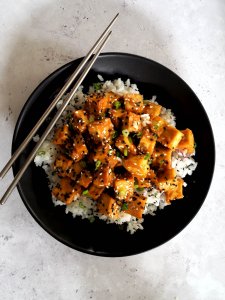 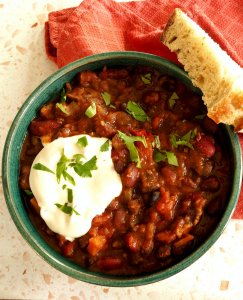 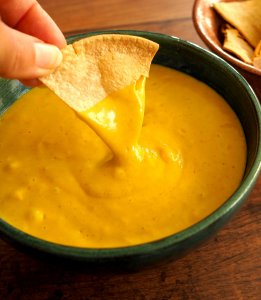